In Conversation with J. William Lewis Author of
The Essence of Nathan Biddle

Bookpleasures.com welcomes as our guest J. William Lewis author of The Essence of Nathan Biddle. William was born in Chickasaw, Alabama, and grew up in Mobile.

Lewis received his J.D. from the University of Virginia School of Law, and served on the Editorial Board of the Virginia Law Review.

After a clerkship for the Honorable Walter P. Gewin on the U.S. Fifth Circuit Court of Appeals, Lewis practiced law in Birmingham for over three and a half decades.

Good day William and thanks for taking part in our interview.

Norm: What do you feel is the most overrated virtue and why?

William: This question cannot be answered because it presents an oxymoron: If a thought or action is a virtue to me, then it cannot be overrated; if it is not a virtue to me, then it is not a subject of the question. On the other hand, if the question is whether I think someone else’s list of virtues contains some clunkers, the question is answerable but probably not really relevant to the curiosity. For instance, if the question is whether being a workaholic is a virtue (which some may ingenuously assert), I would suggest that, although generally good economically, working all the time will cause a person to ignore competing virtues that may be more important and more substantive.

Norm: What do you consider to be your greatest success (or successes) so far in your careers?
William: When I was an adolescent, I intended to be a writer. I chose to be a lawyer instead, because I didn’t want to work for a newspaper or a magazine, and I did not have the fortitude to trudge forward as the soulful but impoverished writer grinding away in a garret.

The important thing not to be missed is that I did the right thing for the wrong reason: I needed a lifetime of experience to write The Essence of Nathan Biddle, which is without a doubt my greatest success so far without regard to how it sells in the book market.

For context, I should point out that I have had four careers, two in lawyering (one as a tax lawyer and one as part of a trial team), one in real estate, and one in writing.

Norm: How did you become involved with the subject or theme of The Essence of Nathan Biddle?
William: One summer at the beach, I reread The Catcher in the Rye, and I was struck by the dissimilarities between Holden’s angst and my own as an adolescent.

I had fretted about almost everything, particularly why I am and who I am, but also lesser frets of interpersonal propriety and belonging.

Holden’s tragic burden is superficially the death of his younger brother from leukemia, but the larger picture suggests that Holden had no emotional support system.

After being expelled from prep school, he avoids his parents (as his sister observes, “father is going to kill you”) and he ends up being committed to a mental facility in California, a continent away from his family in Manhattan.

Norm: Did you write the novel more by logic or intuition, or some combination of the two? Please summarize your writing process.
William: This is a fascinating question that is particularly pertinent to my present quandary. I am working on another novel, and I have the story in my mind (at least in basic form) but I don’t yet know what it is about.

In the case of The Essence of Nathan Biddle, I knew what the overriding theme was before I began writing the story: thus, the task in writing the story was simply to put Kit in a posture where he could not submerge himself or shield himself from the issues of life.

I wanted him to be off balance enough to be isolated but not so much as to be incapable of fretting about existential, personal and interpersonal issues.

As I was writing, themes and plot turns floated into my brain. I would be riding along in the car or sitting on a pew in church and there, without any prompting , something would appear that necessitated a revision or an addition to the tale.

In some instances, I felt more like an amanuensis than a writer. When I write, I have two levels that I have related to the separate hemispheres of the brain: The completion of a novel requires movement back and forth from left to right and vice versa: If I stay in the quantitative zone, I lack poetry; if I stay in the imaginative zone, I lack structure.

The key, therefore, is to move back and forth as needed for beauty and coherence.

Norm: What was your main focus when you created Kit? Is he based on someone you know or have encountered or is he strictly fictional? As a follow up, is there much of you in the character of Kit?
William: Since the angst I wanted to write about was my own, I began with me. Originally, Kit had nothing but the existential and interpersonal angst that I had felt; he experienced nothing except what I had endured; he even had my insecurities and claustrophobia.

Thus the story began as some kind of loose autobiography. Of course, it could not stay that way and actually accomplish my objectives.

Emotionally and physically, Kit is based on me, and much of the background (the interaction with friends, the truck wreck, the convalescence) are based on real events twisted and elaborated to accomplish my purposes.

Much like F. Scott Fitzgerald, I am guilty of stealing from reality to create my fiction. The main focus in creating Kit was to draw a portrait of a young person confronting answerable and unanswerable questions and learning to deal with them on his own terms.

Norm: What purpose do you believe your story serves and what matters to you about the story?
William: This is such a superb question. When I was very young, I thought there were people who had answers to questions that I did not have. Much of my early reading was motivated by a desire to find answers.

Indeed, one of the reasons I went to law school (totally apart from penury) was the need to understand how society is structured and held together.

In particular, I thought that some smart person (I actually began with people referred to as philosophers) had already figured out why we exist.

Early on, I thought that most people had the answers and that I was the one in the dark. (I was actually stunned when I discovered that no one has the answers—surprised because so many people pretend and so many people act as though the questions are irrelevant.)

For those who currently suffer from the feeling of being in the dark alone, I hope that Kit’s struggles provide insight and comfort in knowing they are not alone. I also hope that the story has some poetry in the narrative.

Norm: What was one of the most surprising things you learned in creating The Essence of Nathan Biddle?
William: I have never consulted a psychologist or a psychiatrist (Part Three of the novel is a completely fictional setting) but it has occurred to me that some of the events in my life might have been easier to digest if I had talked to a trained and objective counselor.

On the other hand,my own emotional and intellectual struggles may have made it easier to describe Kit’s need for counseling.

Perhaps the moral is that, if you want to grasp and more fully digest the absurdities of your life, you could do worse than talk to someone who cares or even someone paid to care.

Norm: Where did the title come from?
William: Not long after I began writing, I conceived the notion of metaphorically revealing the major theme of the novel with the cover picture. I had seen the heron standing in the partial light, alone on one leg among the sea oats, at the beach in Gulf Shores, and I knew that he was my metaphor for Kit’s existential angst.

The self-identity theme, the other major fret in Kit’s life, ended up in the title. In the intricate realities of Kit’s family, he is either actually Nathan or probably Nathan.

In any case, Kit became Nathan in both a metaphorical and a symbolic sense; thus, the novel is about his actual existence and his struggles to create his essence. The intent was to have the major themes of the story on the cover of the book.

Norm: It is said that writers should write what they know. Were there any elements of the book that forced you to step out of your comfort zone, and if so, how did you approach this part of the writing?
William: This is a truly pertinent question that would have had more edge at an earlier time. Many of the characters are drawn from real life and real people, so I would probably have been uncomfortable if the novel had been written at an earlier time.

Now, the 1950s are so far in the past that the comfort- zone issues have largely disappeared in the temporal distance or, in some instances, in death. Of course, I thought about the possibility that someone might take umbrage at some description or attribution, but I really haven’t been unduly burdened by it. As for Kit, he is not really more unbalanced than I was in the 1950s.

Norm: Where can our readers find out more about you and The Essence of Nathan Biddle?
William: With regard to the novel, this interview has probably elicited about as much as anyone will find anywhere at this point in time. With regard to the writer, I’m still looking for him.

We are about to create a website that will provide basic information, but the truth is you may learn more about the author from reading The Essence of Nathan Biddle than from any other source.

In terms of background data (if anyone really cares), I wrote a genealogy book some years ago tracing my family back to my eighth great grandfather, Thomas Lewis, who died in Isle of Wight County, Virginia, in 1672.

Norm: What is next for J.William Lewis?
William: If I may borrow from Fitzgerald, “we beat on, boats against the current . . . .” I am trying to find the meaning to the novel that’s in my head. In the case of The Essence of Nathan Biddle, I knew what the story was going to be about from the beginning; I just needed to write a story that truly reflected the meaning.

I now have the opposite quandary: I have a story but I don’t yet know what it is about. Perhaps I should also mention that I am still responsible for my family’s investment company, a task I do not adore and therefore probably do poorly.

Norm: As this interview comes to an end, if you could change one thing about the world what would it be? How would it change you?
William: This is going to sound corny but after all I am a corny person: I wish people could love one another, and I wish I were one of those people.

Norm: Thanks once again and good luck with The Essence of Nathan Biddle.
William: Norm, thank you very much for this interview. I have now done a number of them, and your questions are the most intelligent and incisive of them all. It has been a great privilege to respond. I hope you find my answers as honest and forthright as I intended them. 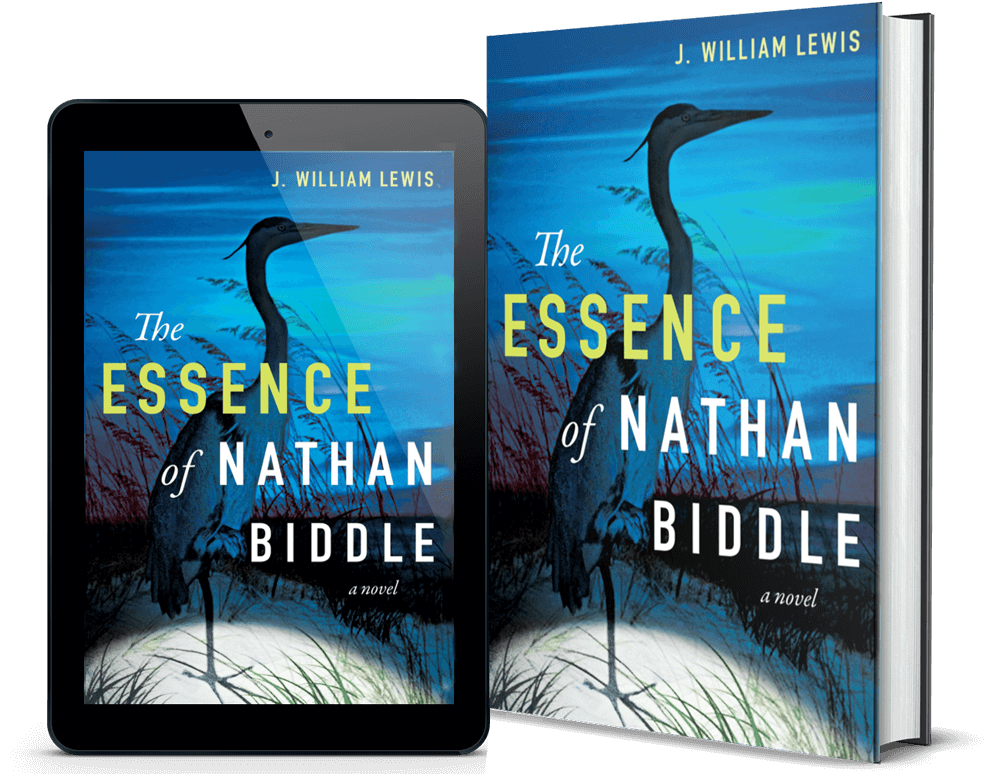 All images, text and materials on this website are Copyright © 2022 by J. William Lewis.
Cover Design by George Foster – Foster Covers. All Rights Reserved.
Author Website design by Rocket Expansion.